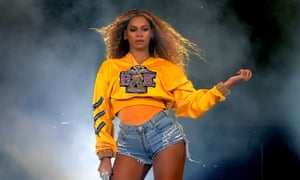 Beyoncé’s 2018 Coachella headline set was a feat of meticulous preparation. She conceived a show that would pay tribute to the culture of historically black colleges and universities. Having just given birth to twins, she worked for months on the exacting choreography and arrangements. And she went on a demanding vegan diet that also eschewed sugar, carbs, dairy and alcohol. “I’m hungry,” she says in behind-the-scenes documentary Homecoming. This, we’re given to understand, is a cautionary tale – she did not wake up like this. “I definitely pushed myself further than I knew I could,” she admits, “and I learned a very valuable lesson: I will never, ever push myself that far again.”

Except that Beyoncé – along with an “exercise physiologist” and founding CEO of a “plant-based lifestyle solutions company” named Marco Borges – are now selling the diet she followed to prepare for her Coachella set. She has posted a video promoting the “Beyoncé’s Kitchen” meal plan to her YouTube channel. It opens with footage from day one of her Homecoming preparations, the sight of her feet on the scale, weight 79.3kgs (12st7lb). In voiceover, she admits: “Every woman’s nightmare … long way to go. Let’s get it.”

We see her dancing, doing battle ropes, sit-ups, intensive stretching and squatting in resistance bands. Borges tells her dancers about the power of vegetables. “When you’re eating plant-based, you will definitely have more energy.” He gets a FaceTime call from Beyoncé: “Guess who fits in the One Woman costume!” she says, twirling in a sequinned bodice that reveals her taut, hourglass figure. “Thank you. It’s a very big deal. She’s coming back. I’m coming back.”

For $14 a month, or $99 (£79) a year, all this can be yours. Except it can’t, because Beyoncé is selling a lie. The performance of physical perfection is part of her job, and she has an expensive team of trainers, chefs and nannies to help her achieve it that isn’t included in the subscription fee. This much we know. We also know that crash dieting seldom results in keeping weight off long-term, and that society’s insistence on new mums losing “post-baby” weight is nonsense. But when looking for any shred of information that might help one lose weight, reason is easily overruled.

Aged nine, you can read Jacqueline Wilson’s Girls in Love, about a teenager who worries she is overweight, and feel frustrated that Wilson doesn’t give you the figures to measure yourself against. Age 12, you can feel soothed when Helen Fielding gives you that yardstick in Bridget Jones’s Diary. Later, you understand why Wilson redacted the figures, and realise what Jones considered fat was nothing of the sort. Even when you know from a lifetime’s experience the consequences of restrictive eating, you can still have your interest piqued by meeting someone who claims a juice “cleanse” really worked for them. You can know that muscles need time to repair following exercise, yet still work out twice a day on consecutive days in the hope of shedding an extra ounce.

Beyoncé is capitalising on this susceptibility. It’s not the first time – in 2006, she discussed the extreme liquid diet she went on to prepare for a role in Dreamgirls, and it was a dangerously easy concoction anyone could knock up at home. Her new meal plan is less accessible, but her profiting from the tools of crash dieting suggests a woman grossly out of touch: exploiting impressionable fans by hawking them an unmatchable ideal, a move at odds with our contemporary insistence on body positivity – an ethos she has also stoked – and the evils of diet culture.

But perhaps this is also Beyoncé at her most human. Hearing her describe her weight as “every woman’s nightmare” is shocking. We are no longer supposed to talk about bodies that way. To aspire to thinness is equated with fatphobia, lapsed feminism and shilling for the patriarchy. Even Weight Watchers rebranded, eliminating the language of dieting from its plans. It’s the bad place. But so is feeling as if you don’t live up to society’s ideals, and still desiring thinness despite knowing it is ethically and medically suspect.

I have spent my life stuck between the two, hating myself for wanting it and for never being able to achieve it. It is no comfort to learn that Beyoncé feels the same way. “She’s coming back, I’m coming back,” she says in the video, echoing the socially sanctioned lie that our lives can finally begin once we fit into those shorts stuffed down the back of the wardrobe.

No matter how dispiriting, Beyoncé verbalising her feelings is a start. Slowly, famous women are challenging these standards. “I learned to stop hating every ounce of fat on my body,” Taylor Swift wrote for Elle. “I worked hard to retrain my brain that a little extra weight means curves, shinier hair and more energy.” In an essay for Vogue, Florence Welch examined her eating disorder and tendency towards self-destruction. “I am still trying to understand what makes young women go to war with themselves,” she wrote.

It’s a battle on both fronts: an internal civil war, and an external resistance against the constant assault of messaging that valorises smallness, keeps women hungry to limit their potential and makes us complicit in promoting that message – spies in the house of self-love. On Beyoncé’s self-titled 2013 album, she sang about the price of perfection, a standard fiercely instilled in her as a child by her domineering father. Uncomfortably, it’s one that our idolatry may also have entrenched.

Voices such as those of Welch and Swift can help us start to examine and unravel these dynamics, though it will never be a fair fight – self-loathing being the perpetual heavyweight to bantam optimism. Beyoncé is the rare person who can overcome the noise of a growling stomach and conflicted mind to reach her full potential. For the rest of us, even clearing the mental path to get there will require a level of energy and determination that a restrictive diet simply can’t provide, whatever Marco Borges says.

2019-07-27
Previous Post: Tips for monsoon skin care for babies
Next Post: THE CARERS, ADVOCATES AND REFORMERS OF WOMEN’S HEALTH

What Is the Flexitarian Diet? Everything to Know About the Semi-Vegetarian Lifestyle

Even if you’ve read up on every last benefit of going vegetarian (it’s better for the planet, better for your health, and, of course, kinder to the animals), the idea of saying good-bye forever to your Grandma’s meatballs or your favorite Thai restaurant’s chicken satay may seem like too much of a sacrifice. But with the Flexitarian

Beyoncé’s 2018 Coachella headline set was a feat of meticulous preparation. She conceived a show that would pay tribute to the culture

The gut or the digestive tract is an organ that has come to the limelight, all thanks to increasing research

The Top CBD Products of 2019: The Men’s Health CBD Awards

IF YOU’RE FEELING BOMBARDED by CBD, blame the 2018 Farm Bill. Yes, this humdrum-sounding piece of government legislation is partially

END_OF_DOCUMENT_TOKEN_TO_BE_REPLACED

It Took Me Years to Separate Working Out From Trying to Lose Weight. Here’s How I Did It